Michael Monroe lives and records on the North Shore of Lake Superior in his solar powered log cabin studio. His instrumental music is seen across the nation on PBS and Canada in the award winning documentary, “Chased By The Light”, about Jim Brandenburg, National Geographic photographer and best selling author. The documentary was shown at the Toronto Environmental Film Festival and New York Indie Film Fest. Brandenburg and Monroe created a LIVE theater experience in several venues including the Guthrie Theater which featured Brandenburg’s magnifcent images and Michael Monroe’s instrumental music. Michael received a 2004 regional Emmy for his music in the KSTP television documentary “Soaring on Mended Wings.”

Monroe has collaborated numerous times with Jim Brandenburg, In Concert With Nature 2003 at the Guthrie Theater, From My Backyard DECC Duluth, Reif, Grand Rapids Palace-Luverne, Memorial-Worthington (2017)) and Conservation Through the Lens UofM Landscape Arboretum in 2016.

In 2012 he released a DVD “LIFE OF MY TIME” celebrating his performing original music for four decades and he released his 11th CD, “TIME TO GET AWAY” in 2013. Monroe received a 2013 Artist Initiative Grant from the MN State Arts Board with Legacy funding and produced a DVD about his “Log Cabin Concerts” about the audiences who come from far and near to hear Michael perform in his charming Grand-Marais, MN log home and see his MisTree Solar-Powered Studio, where he writes and records his beautiful songs. Log Cabin Concerts are featured in Cabin Life and Lake Superior magazines, Star Tribune and KSTP’s On The Road with Jason Davis.

A 2001 McKnight Performing Musician Fellowship Finalist, Michael’s eighth Simple Life recording was nominated 2006 “Best Contemporary” Recording from the prestigious JP Folks out of 25000 albums in 81 categories. It’s an acoustic collection of tunes inspired by his 11 rustic years hauling wood and water. The music was also inspiration from his custom Seaton Guitars made on the Gunflint Trail by luthier David Seaton. His new tenor, “Baby Snow Leopard” and baritone, “Snow Leopard” have these names because they are made of “birds’ eye poplar” wood which resemble spots of a leopard and unique in that they have the sound holes on the top side of the guitar. The frets are made from 200 year-old birch reclaimed from the bottom of Lake Superior.

“ABANDIN MY OWN MIND”, Michael’s fourth recording, was released in July 2000, preserving his last performance of the past century and his first of the new…a LIVE CD, recorded at several venues in MN including a MN Public Radio event in Grand Marais, MN. A “Best Of” recording as well as his demonstration of how he performs using his LIVE looping/layering technique…where Michael recycles the musical harmonies, sings and plays on guitar and bamboo and glass flutes. 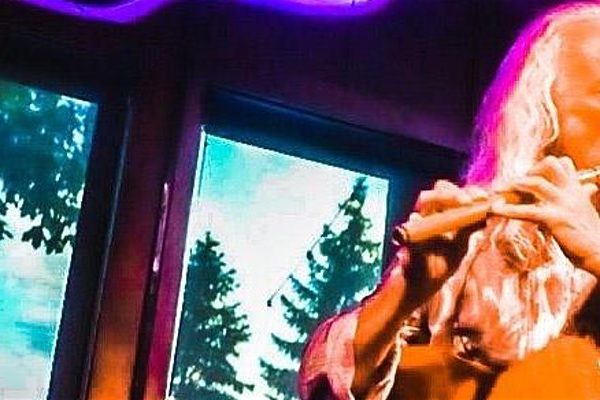