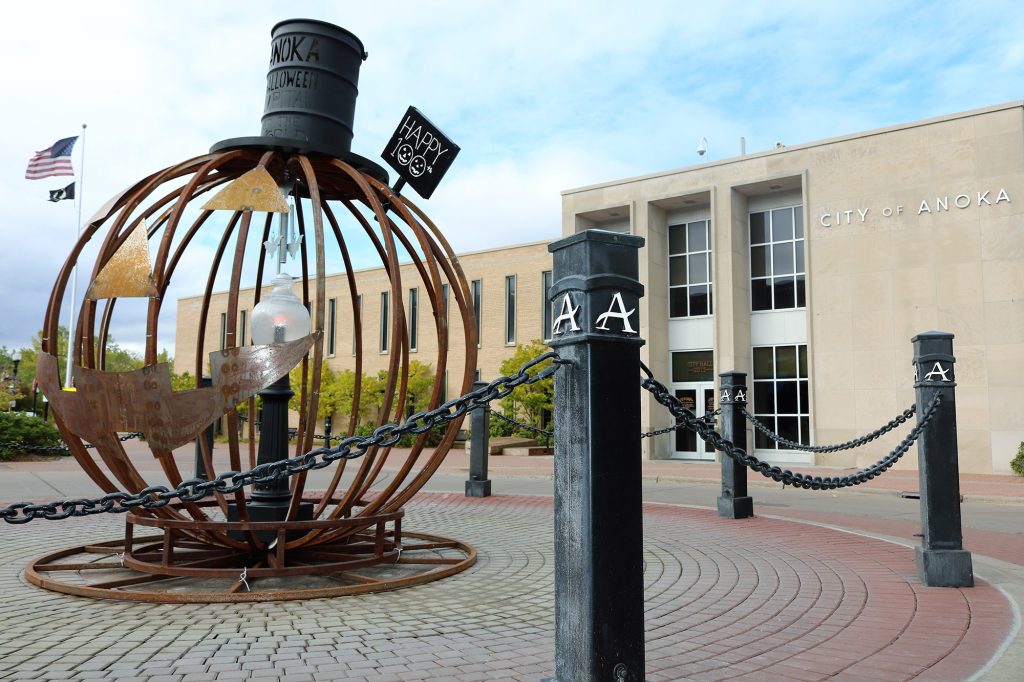 With guests waiting anxiously, Anoka Municipal Utility (AMU) proudly unveiled and gifted a handmade, 12-foot tall, 8-foot wide giant pumpkin made of repurposed materials to the City of Anoka in a ceremony on October 1st, in celebration of the 100th year anniversary of Anoka Halloween, Inc.

Three reasons, according to AMU staff, for the gift are reuse of materials, team building, and celebrating Anoka as the Halloween Capital of the World. The main frame is made from reels in which AMU’s conduit is stored. The top hat is a freshly cleaned barrel that formerly held waste and the brim of the hat is from an old cabinet used to house electrical components. Regarding team building, Greg Geiger, Electric Utility Director said, “I’d been looking for a fun, meaningful team building exercise for the Electric Department that would spill over into other departments and yet be a special gift to the residents of Anoka. With this project, we accomplished our goal.” The Anoka Halloween Ambassadors accepted the gift on behalf of the city in celebration of the 100th year anniversary of Anoka Halloween, Inc.

The actual time it took to construct all aspects of the pumpkin was about 60 hours; however, the planning and design of it was closer to three times that amount. Local artist, Greg Pavlik, donated countless hours to bring this pumpkin to completion. Pavlik is a master welder and an “old school, jack of all trades.” City employees also volunteered their time by working on the project during their lunch breaks or after work hours.

Unveiled for all to see, the pumpkin now sits in the fountain area just in front of Anoka City Hall. It will be stationed there each fall until the annual Christmas tree is “planted” in its place. From there, it will be placed in a city park or another unique location within the city for the public to view during the other seasons.

A name is needed for the new pumpkin. AMU encourages the public to submit name suggestions. The top five names will be selected and the public will vote on those. For details on the process, please visit www.anokamunicipalutility.com.

“Winkie”, the neon, winking metal pumpkin that sits atop Anoka City Hall during October, was gifted to Anoka from the City of Blaine back in 1972. The story of Winkie and how it was named can also be found on the AMU website.

Anoka Municipal Utility is a community-owned, not-for-profit, electric supplier serving the city of Anoka, and portions of the cities of Ramsey, Coon Rapids, Champlin and Dayton. The citizens of Anoka chose to create AMU over a century ago in the year 1909 under the name “Anoka Electric & Water Works”, to provide economical, reliable electric power and have local control over an essential service. Later, it was renamed Anoka Municipal Utility, and in 1992, AMU and seven other cities joined together to form the Minnesota Municipal Power Agency (MMPA). AMU’s job is not just about selling electricity – it sells reliability, customer service, and enjoys being involved in the community.