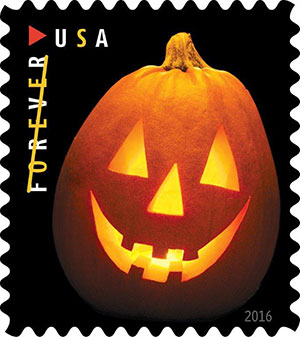 ANOKA, Minn. – The City of Anoka is honored to have been selected by the U.S. Postal Service to be the official host city for the First Day of Issue (FDOI) and unveiling event of the four 2016 Postal Service Jack-O’-Lanterns Forever stamps. Known as the “Halloween Capital of the World”, Anoka is planning to make the event a grand celebration leading up to its annual Halloween activities.

The First Day of Issue will take place on Thursday, Sept. 29, 2016 at 11:00 a.m. at Anoka City Hall Plaza, 2015 First Ave. N. The grand celebration is slated to include a program of notable speakers, music, activities, and much more! Stamp collectors and all attendees will have the opportunity to purchase the stamps and FDOI cancellation envelopes, as well as other merchandise showcasing the four stamps. Use the hashtag #HalloweenStamps to share the news on social media.

In the spirit of Halloween, the U.S. Postal Service issues these delightfully eerie stamps featuring photographs of four different jack-o’-lanterns. These creatively carved pumpkins have been symbols of Halloween in the United States since the late 19th century, not long after celebrations of the holiday began here. These are the first Halloween-themed stamps issued by the Postal Service. Paul Montanari designed and carved the pumpkins under the art direction of Derry Noyes of Washington, DC. Sally Andersen-Bruce photographed the lit jack-o’-lanterns used on the stamps.

“I want to thank all of the hard work that so many folks did here in Anoka and beyond. I want to recognize John Freeburg, who brought the stamps to our attention, and Anoka Postmaster, Dan Stark, who immediately jumped on board. The City of Anoka, Anoka Area Chamber of Commerce, Anoka Business & Landowners Association, Anoka County Historical Society and, of course, Anoka Halloween, Inc. all played important roles in helping to land Anoka as the site for this unveiling,” said Bart Ward, resident and former Anoka Halloween President.

In addition, this year is the 100th anniversary of the historic “Old Post Office” located at 300 E. Main St. The Anoka County Historical Society has done a significant amount of research for this year’s recognition of the building.

Each October in Anoka, the Halloween Capital of the World, a local volunteer organization known as Anoka Halloween, Inc. and its sponsors work together to draw thousands of people to the city by organizing numerous events and activities throughout the month of October. For more information about the City of Anoka and Anoka Halloween, please visit www.ci.anoka.mn.us and www.anokahalloween.com.